"Ye cannae pay the bills with a view"

Almost 30 years ago, Peter Cairns drove up a windy, tree-lined road in the Cairngorms and discovered a place that would not only become a family home, but a lifetime commitment to nature recovery.

With a gleaming property brochure in my hand and apprehension running riot in my stomach, I drove up the windy, wooded glen shadowed by towering Scots pines. When the trees petered out, a littered farmyard revealed itself complete with dilapidated caravans and an eclectic mix of rusty machinery. I had no idea what I’d expected, but this wasn’t it. An hour or so later, I thanked the farmer for showing me around but told him: “It’s too big, too much money and too much work.” I was glad to drive away. It was the summer of 1994 and by that autumn, somehow, my wife and I, our five-month old baby and two boisterous dogs had moved in.

The morning after we parachuted into a remote Cairngorms glen, our nearest neighbour called by. She had the farm next door and no doubt wondered what these wet-behind-the-ears newcomers were all about. We stood watching the clouds scud across the mountains. “You’d never get tired of that view,” I reflected. “Aye, but ye cannae pay the bills with a view.” Her dismissive tone was a jolt, then, as I pointed to a young roebuck crossing the river, her next response was a dagger through my heart. “And the only animals worth much are those you can eat.” I smiled politely, but in that instant, I knew my life’s work was to prove her wrong.

Ballintean nestles in Glenfeshie, on the western edge of the Cairngorms National Park. In 1994 it comprised 130 acres of close-cropped grassland alongside the River Feshie, one of the most dynamic river systems in Europe. The Feshie’s potential for flash flooding could be seen in the number of old fences strewn across the riverbed. These looked like part of the natural landscape however, compared to the abandoned cars that lay partially buried in the gravel.

For years, the farm had been used as a riding centre and when we moved in, the ground supported nearly 70 horses. The gravelly soils of the river floodplain were grazed bare and one summer night, when I counted 92 red deer in the field, I understood that we had become custodians of a fast-food restaurant for the local grazers, both wild and domestic.

Several months later with the horses gone, we tentatively started planting native trees, but the incessant grazing pressure from large deer herds meant our efforts were constantly thwarted – nothing made it above knee height. Our neighbour peered down from her tractor, shaking her head. “The only way to get trees growing here is behind a fence.” Having spent hours, weeks, months uprooting miles of rusting stock fencing around the farm, I wasn’t about to go back down that road.

Meanwhile, we set about renovating a large stone steading that took all of our money, most of our resolve and nearly our marriage, but on May 25, 1997, with our bank account empty and the paint still drying, the doors opened and in walked a group of birdwatchers. Our tourism business was up and running. 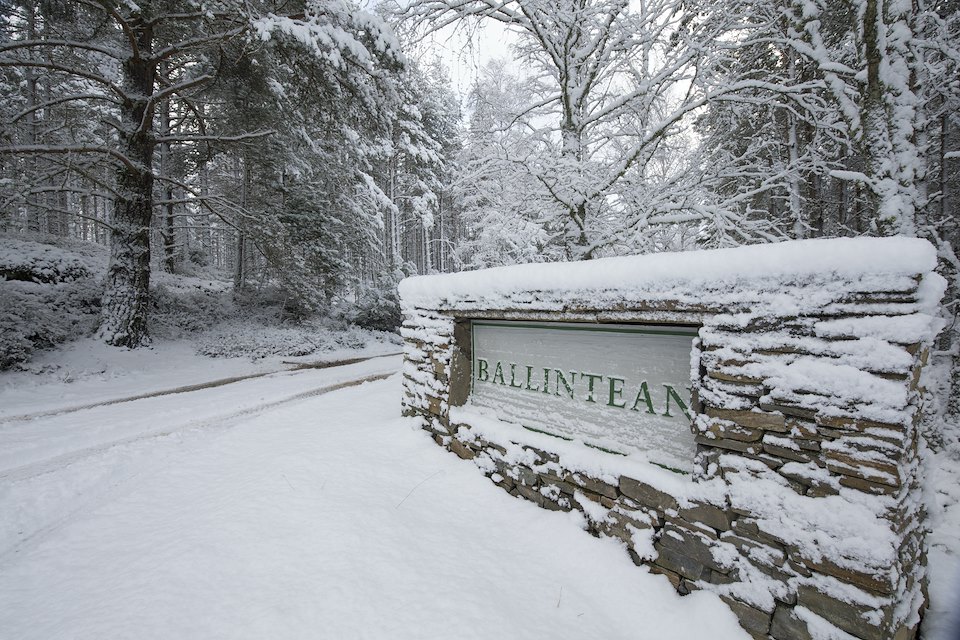 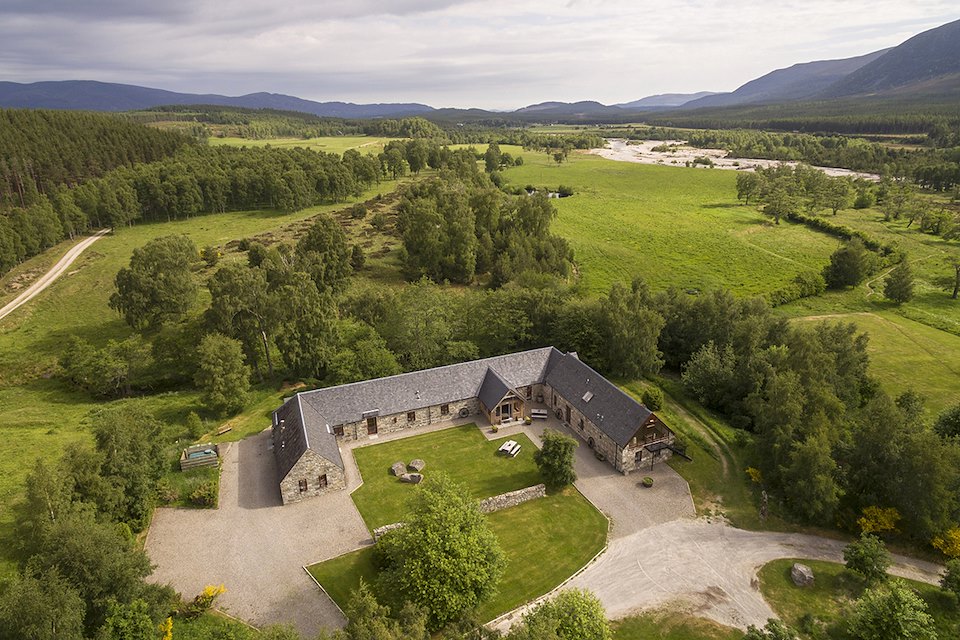 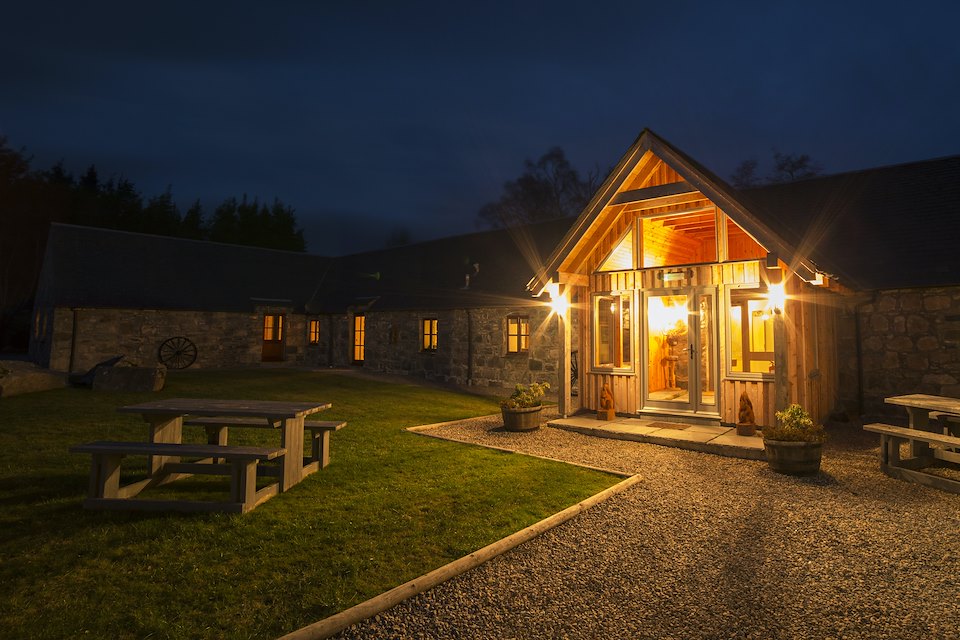 Fast forward 12 months and I’d jumped into a partnership with Mark Hamblin, an established wildlife photographer. Photography tourism was barely heard of back then but very quickly, we were running nature photography tours, not only in the Cairngorms, but around the world.

In a few short years, I saw bears roaming the forests of Finland, wolves pulling down bison in north America, and thousands of cranes gathering on migration in Sweden. I started to ‘read’ the landscapes I spent time in. I learnt about ecological processes - vegetation succession, predator-prey dynamics and trophic cascades. I started to see Scotland very differently and realised that though its beauty and drama is undeniable, the abundance and diversity of its nature is severely impoverished; its natural systems faltering. It became apparent to me that our perception and understanding of Scotland’s ‘wild nature’ was severely skewed.

In 2003 I got a call from Paul Lister, an eco-philanthropist who had recently bought Alladale Estate in Sutherland. He wanted me to photograph the story around a massive programme of ecological restoration – reconnecting woodland, revitalising drained peatlands and reintroducing lost species. In parallel with Paul’s acquisition of Alladale, a hugely controversial and significant deer cull took place on Glenfeshie Estate, just a mile or so from Ballintean. These two events changed everything.

Paul Lister’s plans ignited huge media interest and although the narrative focused mainly on the return of wolves, ‘rewilding’ quickly became a thing. Meanwhile, the reduction in deer in Glenfeshie, brought about by long-term over-grazing impacting on the ability of native woodland to regenerate, had a huge effect on Ballintean. With no natural predators, deer had proliferated and for a long time, this was welcomed by the estate, its revenue and capital value primarily based on the number of deer that could be shot on its grounds. With deer numbers in the area reduced however, our trees started to grow – not the meagre handful we’d planted, but on their own, in their hundreds, in their thousands. Birch and pine sprung from bare gravel banks, alder and willow took root along shingle bars in the river, and juniper and gorse began smudging the hillsides and open glades. Suddenly Ballintean came to life.

Pine martens, once the holy grail of wildlife sightings, are now nightly visitors to our accommodations.

With the help of raptor legend Roy Dennis, we built an osprey platform, which was immediately occupied. Tawny owls, great-spotted woodpeckers and crested tits nested in our veteran trees; red squirrels started to use the emerging woodland corridors; redstarts, jays and cuckoos flitted across the increasingly blurred lines between trees and grassland. We introduced a small herd of Highland cattle to boost insect numbers, seed dispersal and to diversify the floodplain vegetation – they now graze across a wide, unfenced landscape. Scotch argus appeared in their droves in the damp glades that the cattle opened up. I started to see otter spraint along the burns, and pine martens, once the holy grail of wildlife sightings, are now nightly visitors to our accommodations, along with badgers. The riverbed – once a wide expanse of bare shingle – has slowly become more complex, with deadwood creating pools and tree roots providing shelter for young fish, while the river itself has been driven into myriad channels, slowing its passage downstream. 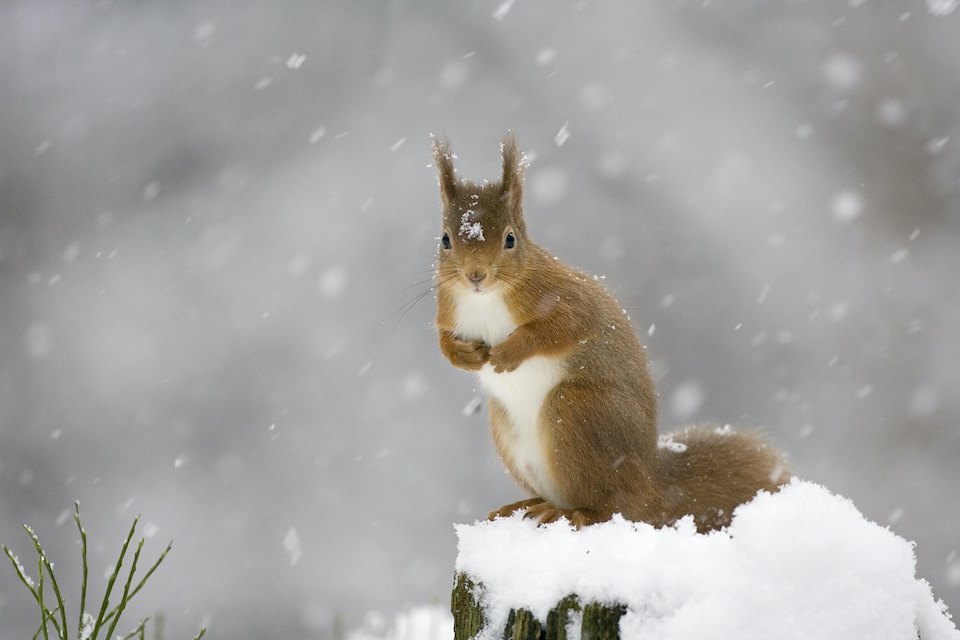 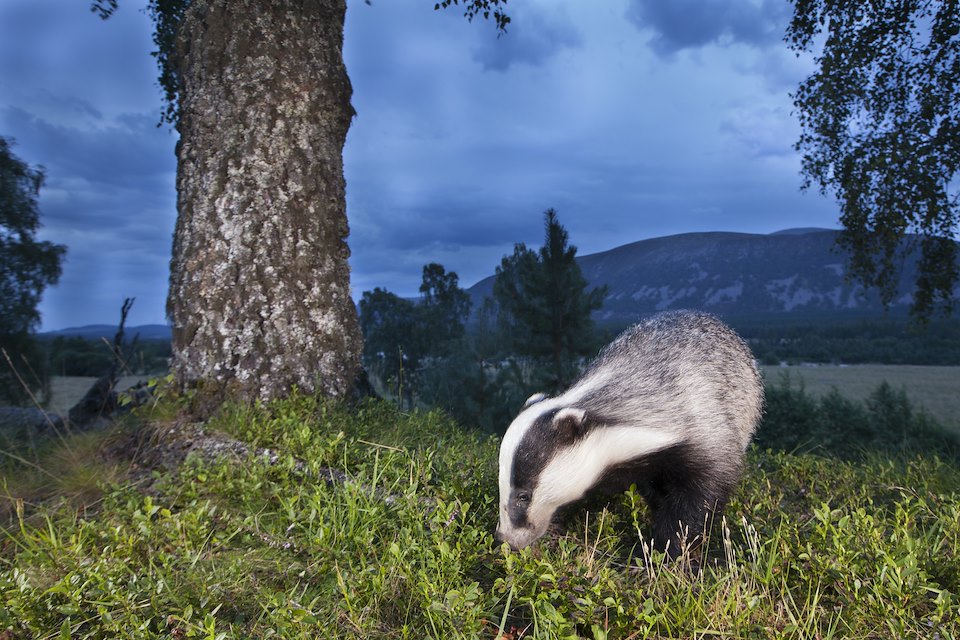 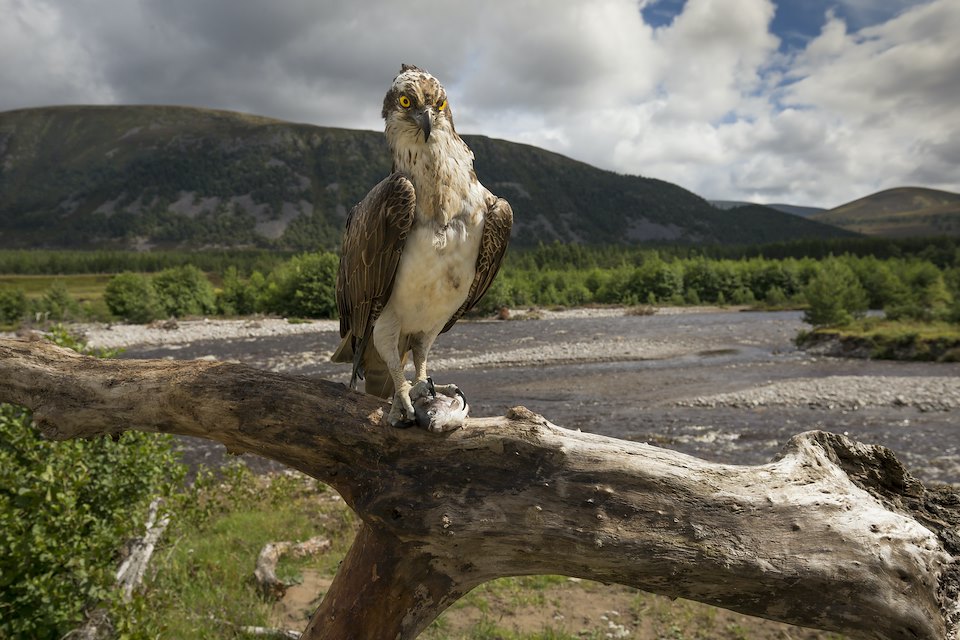 And what magic wand did we wave to create this pulse of life? None. We are no doubt beneficiaries of neighbouring landowners, who for the most part, like us, can see the potential in restoring and reconnecting this landscape, and are prepared to give nature some breathing space, some freedom to express itself and to forge its own outcomes. Ballintean sits on the edge of Cairngorms Connect, Britain’s biggest habitat restoration initiative, encompassing 600km2 of forest, river and mountain, a seamless landscape dedicated to wildlife. It is rare in Scotland to find a number of landowners willing to collaborate around a shared vision, but in this part of the Cairngorms, and increasingly elsewhere, some remarkable results are being achieved.

Our nature tourism business continues to prosper with families and groups from all over the world coming to immerse themselves in the wild nature of the Cairngorms. Photographers, walkers, cyclists, yoga enthusiasts – they all follow their chosen pursuit against the backdrop of a landscape in recovery. We invest the profits, not only in pushing forward our own rewilding efforts, but those of others. We now see our business as part of a growing nature-based economy supporting local jobs and services and placing a tangible economic value on the restoration of wild nature.

The principles on which Ballintean has evolved over the last quarter century, is now part of a growing rewilding movement, a bold vision to breathe new life into our damaged and degraded ecosystems. Promoting the benefits of a rewilded Scotland has become my world, my career. The past three decades have I hope, equipped me with ecological knowledge but more importantly, I have learned a lot about people, their motivations, priorities and values. Rewilding might be seen as a physical process, but it relies on people seeing opportunity in a different approach to land management. More than anything, rewilding is about winning hearts and minds.

Sadly, my neighbour died several years ago, and I regret not being able to talk with her about rewilding, and to try and dispel the traditional notion that nature is purely a decoration, an indulgence. I think she believed there had to be a straight choice between the needs of nature and those of people – that the Highlands couldn’t comfortably accommodate both.

Today Ballintean is home to an expanding programme of rewilding retreats run by SCOTLAND: The Big Picture, a charity that supports and enables the transformational recovery of nature across Scotland. I hope that our small Highland farm provides an environment for a fun, fulfilling and inspirational guest experience, but that we also demonstrate the economic and social case for an ecologically restored landscape; to prove that the view, and the animals within it, can pay the bills. 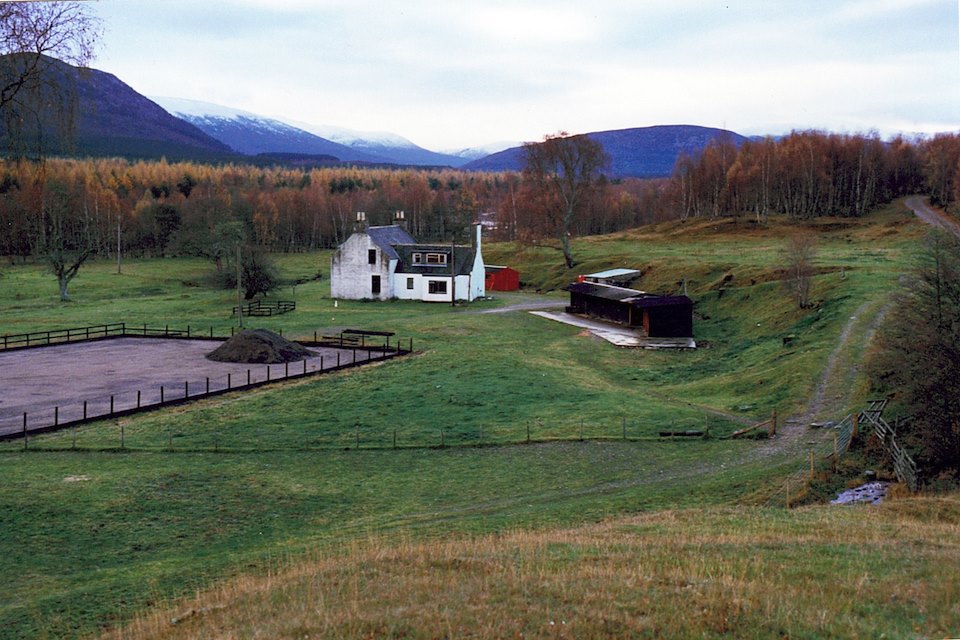 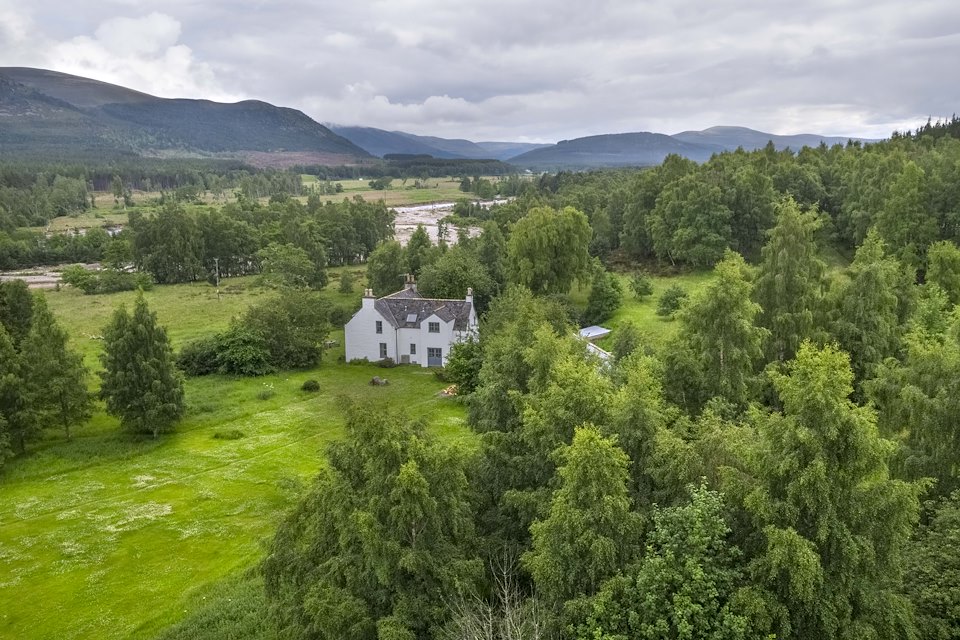 The southern end of Ballintean in 1995…and in 2020 with extensive regeneration of native woodland revitalising the landscape.