It's usually pretty easy to pinpoint the exact moment humans begin to care about an ecological issue. All too often it's the very second it becomes too late to fix it.

History backs this up. The quagga was an extinct subspecies of plains zebra found in South Africa. Superficially horse-like with a coat of rich chestnut-brown and stark white legs, it only betrayed its zebra-ness by a striped head and shoulders. The last individual lived her life far from the Cape veldt in Amsterdam zoo, dying in 1883. Protective legislation was put in place in 1886.

The passenger pigeon is a potent emblem of extinction, and in the early 19th century may have been the most populous bird species on the planet with numbers in the billions. In 1914 the last individual died in Cincinnati zoo, a survivor from a lone eccentric’s aviary. In 1918, the landmark Migratory Bird Treaty Act became federal law.

The thylacine survived in isolated Tasmania until Europeans arrived. A magnificent, tiger-striped, dog-sized marsupial with a bite that could crush bone, it inspired nothing but fear amongst the colonising sheep-farmers. Blamed for losses and hunted with bounties and without mercy, the last individual died of exposure in a Hobart zoo in September 1936. Official protection by the Tasmanian government was ratified in July 1936.

Recently there has been a lot of discussion surrounding the issue of "de-extinction" or species resurrection. This is the idea that with the aid of modern genetic technology and ancient DNA, we can simply bring back species that have gone extinct. It's a seductively dangerous path to follow, one that all but ensures public complacency in the face of the extinction crisis we are creating right now. I have worked in ancient DNA, spending my professional life in sterile clean rooms that smell of bleach, painstakingly transferring microlitres of clear liquids from one tube to another in the often-vain hope of encouraging them to amplify again. One thing anybody in the field will tell you is that we are not going to be cloning mammoths or dodos anytime soon. The technology to bring back DNA from the past is primitive. The technology to turn recovered DNA into living animals does not exist.

That is not to say that working with ancient DNA is entirely useless. We're not in the business of cloning thylacines, passenger pigeons, or quaggas but the genes of lost animals can still tell us a lot. I've found one of the most interesting applications of ancient DNA has been in the service of rewilding and reintroduction work.

"We are not going to be cloning mammoths or dodos anytime soon."

Most people are aware that red kites and sea eagles symbolise the successful reintroduction of birds that were once common. More recently, beavers have returned to Scotland’s waterways – the first ever return of a native mammal to Britain.  These isolated successes however, sit against the sobering, massive scale of extinction our country has been witness to. Britain, until just a few hundred years ago was home to wolf. Within the last few thousand years, there were lynx, moose, reindeer, brown bear, and aurochs. A little further back in time and we had woolly mammoths, woolly rhinos, steppe lions, sabretooths, giant deer, cave bears and cave hyaenas as part of our native fauna. 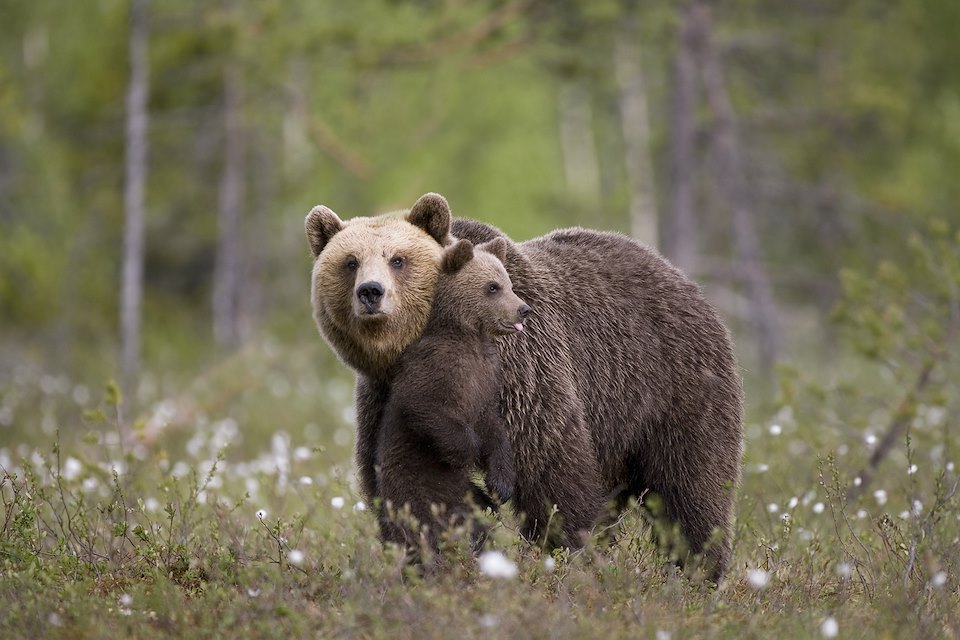 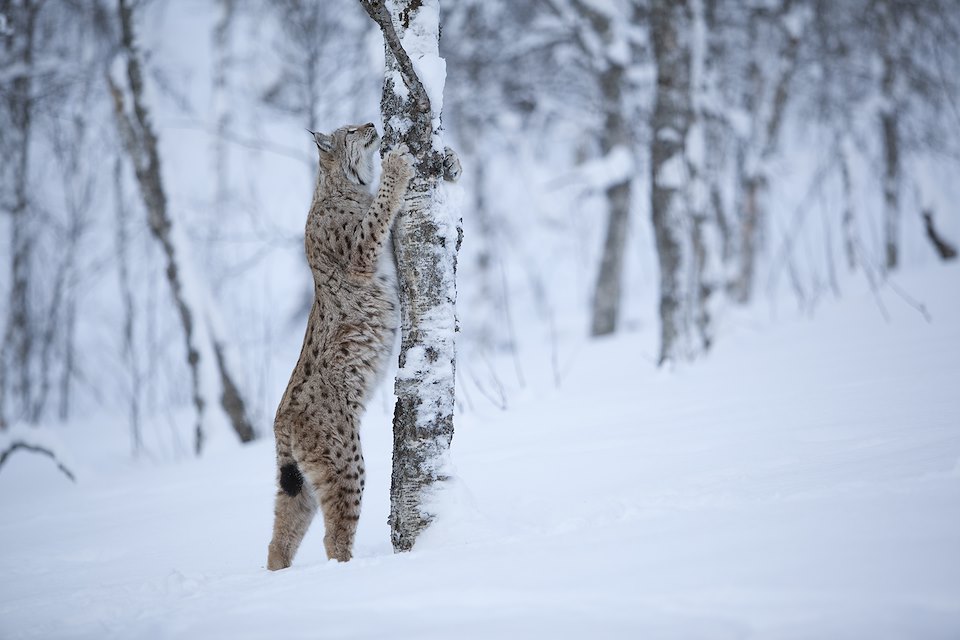 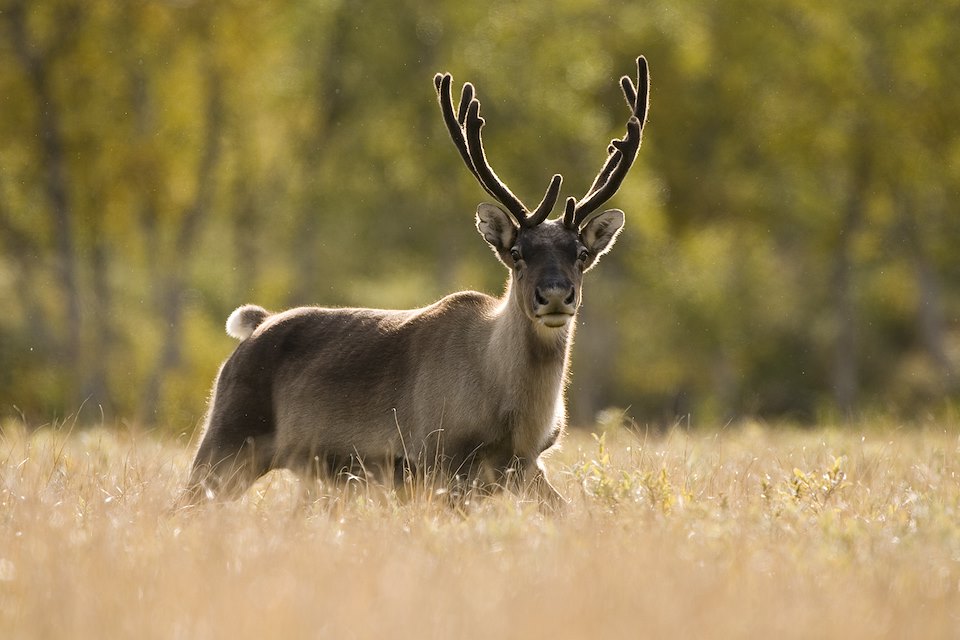 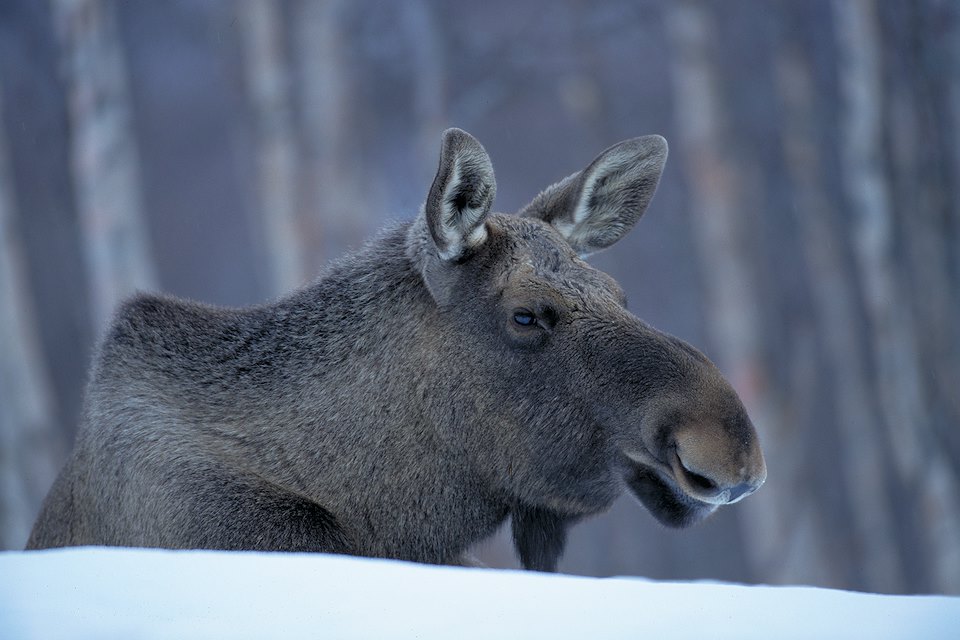 Brown bear, Eurasian lynx, reindeer and elk (moose) are all native to the UK.

They're all gone now. But we can still learn some pretty interesting facts about vanished species just from looking at the tiny snippets of DNA they've left behind in their bones. For example, the cave hyaena that is so abundant as fossils in British caves is simply an extinct population of the spotted hyaena, which survives in sub-Saharan Africa. The story of their bones and genes show that spotted hyaenas have enormously expanded (and later contracted) their range with the ebb and flow of the climate, at times reaching as far as China to the east and the Altai to the north.

The extinct giant deer with its 12-foot antlers, has a closest surviving relative in the comparatively titchy fallow deer that still graces parks and estates nationwide. My own research has helped to show that the steppe lion, a hugely impressive giant cat that was master of the ice age tundra, is just a side branch of the modern African and Indian lion family tree.

In a similar way, for species that have gone extinct in Britain but which still hang on elsewhere, genetic evidence can be crucial for the success of rewilding projects.  The IUCN (International Union for the Conservation of Nature) guidelines bluntly state that: “if there is a choice of wild populations to supply founder stock for translocation, the source population should ideally be closely related to the native stock”. The only realistic way to check this with extinct populations is to use ancient DNA. It’s an important step because Britain was something of a crossroads for mammal species during the Pleistocene.

During the height of the ice age, Britain was connected to continental Europe thanks to lowered sea levels exposing the English Channel. The miles of glacier that sat atop Scotland and northern England contained so much water that sea level was dozens of metres lower than it is today. When Britain was merely the northwestern peninsula of Europe, animal species walked here from the various refugia they had called home during the frigid heights of glaciation.

Because of this, Britain's fauna is a mix of populations that can claim alliance with survivors in the Iberian Peninsula, Scandinavia, and even the Balkans. Of course this makes following the IUCN's edicts slightly more complicated. For mammals, this has been tested in the case of the beaver's return to Scotland. The Scottish Government, working with various wildlife charities, have left nothing to chance in their reintroduction programme

Ancient DNA from beaver bones recovered from British caves and fens and compared with modern samples, showed a simple pattern in the beaver family tree: there were just two branches, a western one and an eastern one. British beavers were part of the western branch.  Thankfully, the official Scottish reintroduction had procured Norwegian beavers from the Telemark river system that were also part of the western branch, fulfilling the IUCN criteria. Incidentally, as well as the official beavers in the government trial in Knapdale, Argyll, there are a number of 'unofficial' beavers, that seem to have appeared from nowhere in various parts of the country. 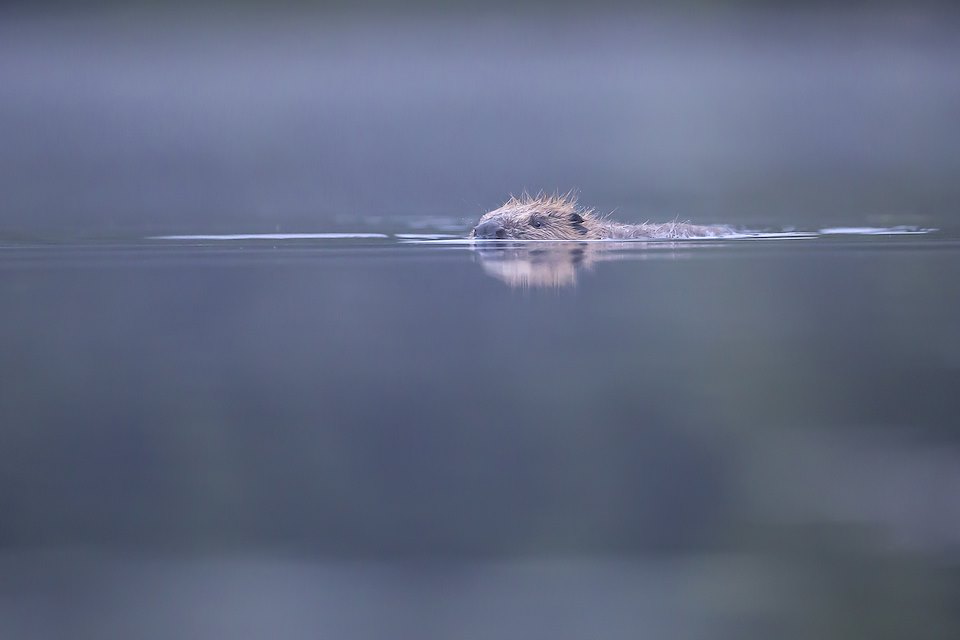 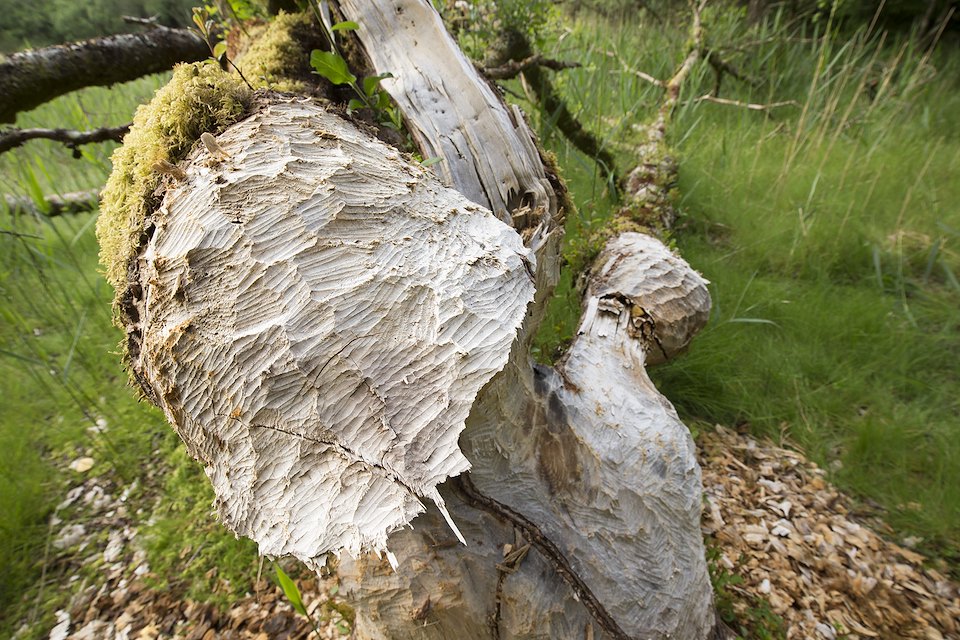 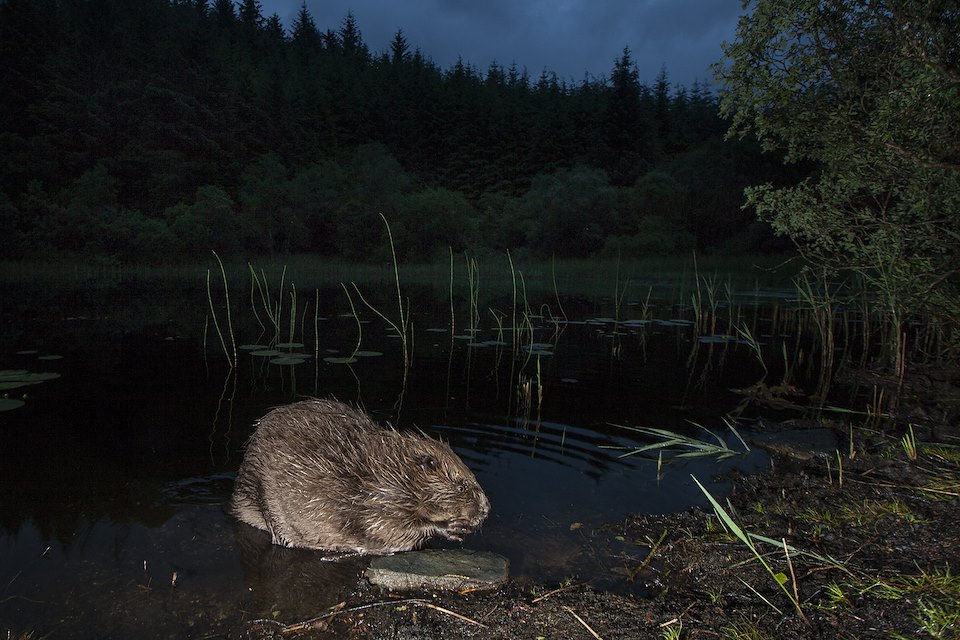 Beavers are now going about their watery business across large parts of central and western Scotland.

A significant population of beavers was discovered in rivers in Tayside not long after the Knapdale project started, and threatened to derail the whole reintroduction process. Happily, they were enfolded into a larger Scottish trial project and given the same protections as the Knapdale beavers. They were even genetically analysed (given that their origins were unknown) and found to also be part of the western branch, originally from Germany.

The story of the return of beavers to our countryside is an epic tale of collaboration towards a wonderful shared ideal: that local extinctions can be reversed. We are lucky enough that beavers still live and can be relatively easily brought back to Britain, where with a little bit of help and protection they can thrive again.

What does this mean for other species that could potentially be returned?

We know that Eurasian lynx went extinct here during the medieval period, due to human persecution and habitat loss, but no group has looked at the genetics of the extinct British population.

The lynx genetic family tree is also fairly simple and there is only one branch found in Western Europe, which simplifies decisions for where to source a stock population. For this it might make sense to look at the Dinaric Alps, where successful translocations have already been done, and a healthy population exists.

If we are to capitalise on the runaway public interest in reintroductions and rewilding in Britain, I think the lynx is the natural next step. This beautiful, secretive cat has been reintroduced successfully in many countries, all of which provide useful guidelines for attempting it in this country. The risk to humans is nil. The risk to livestock is real, but manageable if the political will is there.

Apart from massive benefits to rural tourism, lynx would also help to reduce burgeoning deer populations, their primary prey being woodland deer such as roe and non-native sika. It really does feel like we are at a crossroads. Beavers and lynx don't have to share the fate of the quagga, passenger pigeon and thylacine. We don't have to stand idly by, watching with casual disregard while species descend into the extinction vortex. Using all the tools at our disposal it is possible to reverse the trend and bring back what was once lost. The direction we choose is up to us.

Ross Barnett is author of The Missing Lynx, a fascinating account of why some of Britain's most charismatic animals are gone, and how in the future these missing beasts could return.

SCOTLAND: The Big Picture has published The Lynx and Us, a beautifully illustrated book which describes how this enigmatic predator is recovering lost ground in Europe and, crucially, what that means for the human population in this, the busiest of continents.