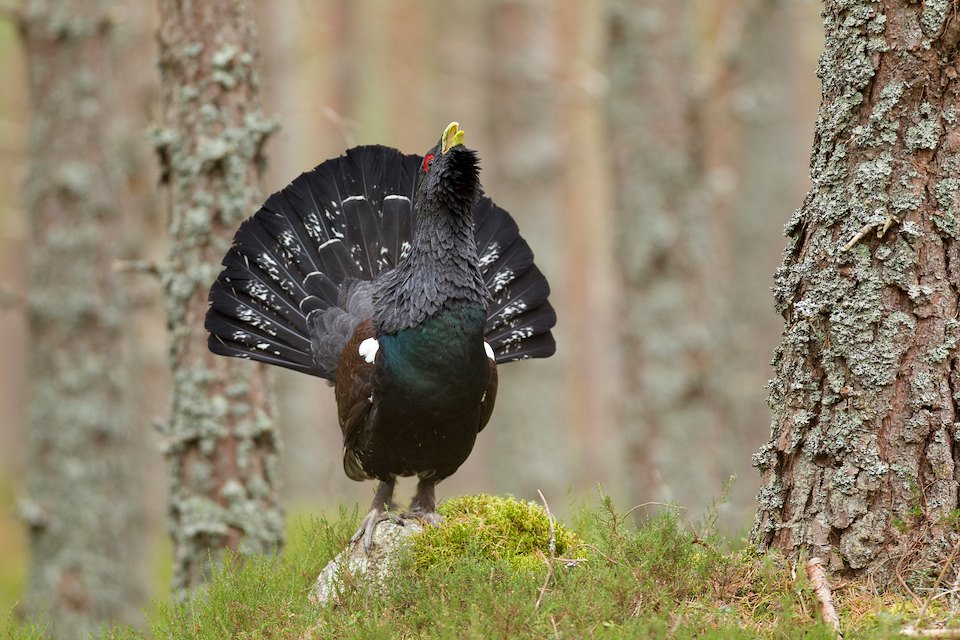 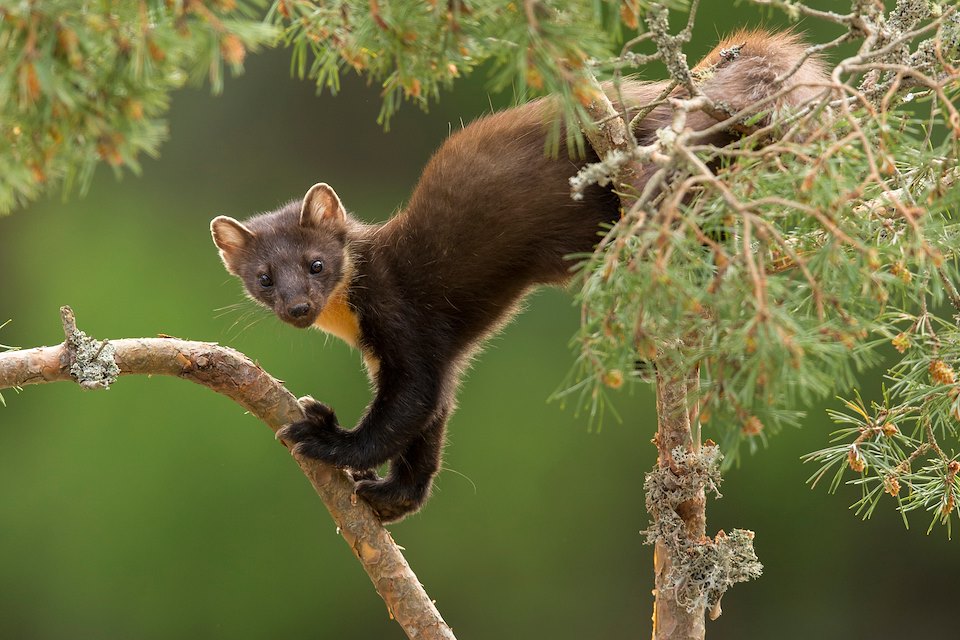 Is sacrificing one protected species to save another an appropriate pathway to reversing ecological decline?

Capercaillie have been part of Scotland’s landscape for thousands of years. Extinct once before in the 18th century, we now face again the threat of losing the world’s largest grouse.

So, what can be done? Opinions abound, but nobody knows for sure why capercaillie are struggling. Reduced and fragmented woodland habitat, disturbance, fence collisions and climate change have all been identified as possible individual or collective causes. It is the issue of predation, however, that divides opinion and it’s a recently recovered predator that finds itself in the spotlight.

Pine martens were once one of the UK’s most common carnivores. And recently, relieved of centuries of habitat loss and persecution, martens have expanded from their west coast refuge and found their way back to the forests of the Cairngorms, where they are coming into contact with the beleaguered capercaillie.

We are a fickle nation when it comes to attitudes towards wildlife. Ecological knowledge is often trumped by sensationalist headlines and misconceptions rooted in cultural tradition.

I recently tuned in to a meeting of the Cairngorms National Park Authority (CNPA) board, as part of the online public audience. The members had been asked to consider a recent report, commissioned by the Government’s nature agency NatureScot, proposing a number of actions to counter reductions in capercaillie numbers, including increased predator control.

Many would argue that the Cairngorms – the UK’s largest National Park and home to 25% of the country’s endangered species – has an opportunity, if not an obligation, to lead the way in restoring our diminished ecosystems.

With this in mind, I was alarmed to witness one board member refer to pine martens as “beasts” that “kill just for fun”, saying they’re “out of control” and “threatening our native capercaillie”. He went on: “We should do the right thing by our wildlife and remove pine martens.”

Putting aside significant inaccuracies in these statements, the board member is effectively recommending that one protected species should be sacrificed to save another. More worrying, perhaps, is that in 2022, such ill-informed generalisations are finding their way into public discourse, perpetuating the demonisation of species that don’t fit our idealised view of nature.

As a ground-nesting species, capercaillie are susceptible to a wide range of predators, including pine martens. While there is some evidence for the efficacy of targeted, short-term control, routine predator suppression, which has dominated countryside management for decades, has failed to arrest and reverse ecological decline.

Predator-prey interactions are almost infinitely variable and reducing complex ecological relationships into binary choices between one species over another is irresponsible at best.

The count of male capercaillies at Abernethy National Nature Reserve has increased by one third since predator control was stopped in 2019. Richard Mason, Abernethy Conservation Manager for RSPB Scotland, says:

“Predator control has failed to prevent decline of capercaillie across Scotland. We don’t think the solution is to start killing other predator species, but to restore habitats and rebuild more functional predator populations. The return of pine marten, white-tailed eagles and goshawks to our forests is a great success story and the discussion now should be about how to further restore naturally functioning forest ecology, not to dismantle it again.”

Abernethy is part of Cairngorms Connect, a nature recovery area extending over 600sq km. Within its boundaries there are growing populations of predators such as goshawks, hen harriers, otters, badgers and pine martens, none of which are controlled by gamekeepers. Over recent years, the Cairngorms Connect Predator Project (CCPP) has employed state-of-the-art genetic techniques to study the diet of mammalian predators such as fox, badger and pine marten.

The long-term study has revealed that these generalist predators are mainly eating field voles. When this cyclical food source is less abundant, deer carrion, shrews, amphibians and reptiles are the most common alternative prey items. In total, 67 species of prey have been found in the varied diets of fox and pine martens. Capercaillie and black grouse were among the rarest species detected.

The CCPP is not intended to determine the impact of predation on the capercaillie population, but it does offer a valuable insight into the multi-layered relationships between predators and their prey, and between the predators themselves. Foxes eat pine martens for example, which potentially reduces the impact of martens on capercaillie nests.

Decision-making around capercaillie conservation is difficult. Very often, policy is dictated not by ecological factors but by political and cultural considerations, such as those voiced at the National Park board meeting.

Watching that meeting, I was reminded of the witticism credited to Albert Einstein: “Insanity is doing the same thing over and over again and expecting different results.” Killing predators will not save capercaillie. The science is recent and relevant; let’s use it.

SHOW ME THE NATURESCOT REPORT ON CAPERCAILLIE