WHERE THE FOREST HITS THE SEA

The Cowal peninsula might feel remote to some, but for one family with an astonishing record of global adventures, this is not only now their home but also the backdrop to fulfilling their rewilding dream.

You’re never far from water in this part of the world. Generous amounts fall from the sky year-round, satiating the lush mosses and other bryophytes scattered in fragments of ancient rainforest, while feeding the brooding sea lochs that reach deep into this jigsaw puzzle of a landscape.

As I wind along the twisted lanes of the Cowal peninsula on Scotland’s west coast, with the eastern fringes of the Atlantic glistening on the horizon, I remind myself that I’m only two hours from Glasgow despite the growing sense of isolation as each mile passes. But watery remoteness was never going to faze the owners of Auchgoyle Farm, Katharine and David Lowrie.

I turn into a rough track with a lichen-encrusted sign. Auchgoyle is one of five land partners within just a few miles of each other that are part of the Northwoods Rewilding Network. Lean and bronzed from a combination of wind and sun, Katharine and David have been here for less than three years, but their story has been much longer in the making.

"We decided to run the length of South America – 6,504 miles if you're wondering."

“We were living in a caravan in an orchard in Devon when one morning David left a note under my pillow,” Katharine recalls. “It read: ‘I think we should sail to South America.’” That was back in 2008 and, reluctant to incur the carbon footprint of a long-haul flight, the intrepid couple bought an old wooden sailing ship, stared the Atlantic straight in the eye and set sail. “As long as you didn’t want to go against the wind, the boat was fine,” laughs David.

Such a seemingly audacious plan was in fact firmly rooted in a deep desire to do something positive for wildlife. The notion of travelling through South America while working in conservation, and pushing themselves in their adventures, had been growing in their minds for some time; an itch that needed scratching. But their next decision took the challenge to a whole new level.

“We decided to run the length of South America – 6,504 miles if you’re wondering – and on the way, raise money for conservation.” In 2012, timing their departure to coincide with the London Olympics, they hitched up a home-made human-drawn trailer and set off on their 15-month journey.

“En route, we knocked on the door of schools to ask if we could speak to the children about wildlife, habitats, the global food system – anything that would resonate and provide the kids with a different perspective. They weren’t used to visitors, let alone foreign visitors, and welcomed us with open arms.” 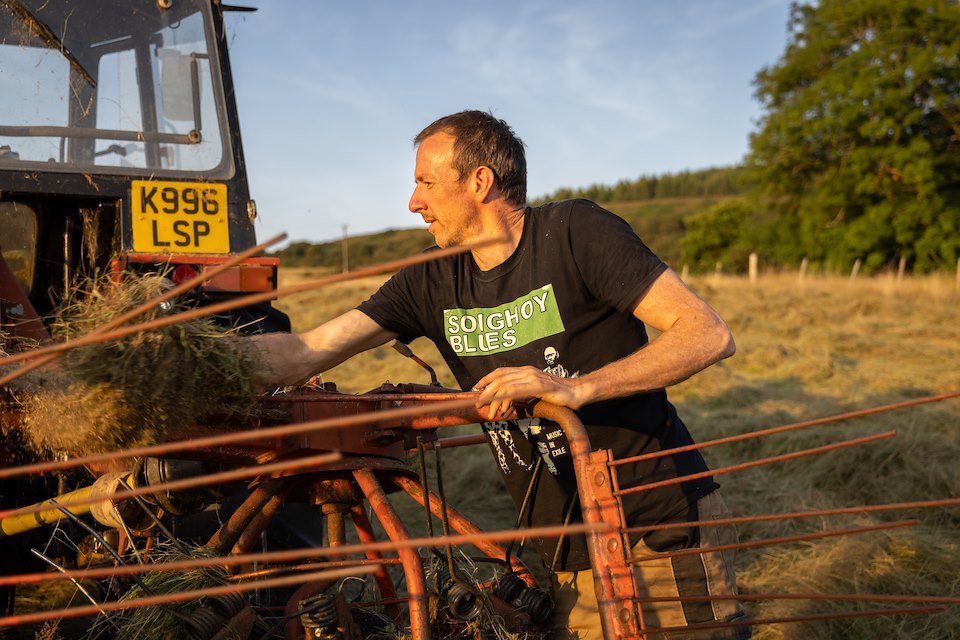 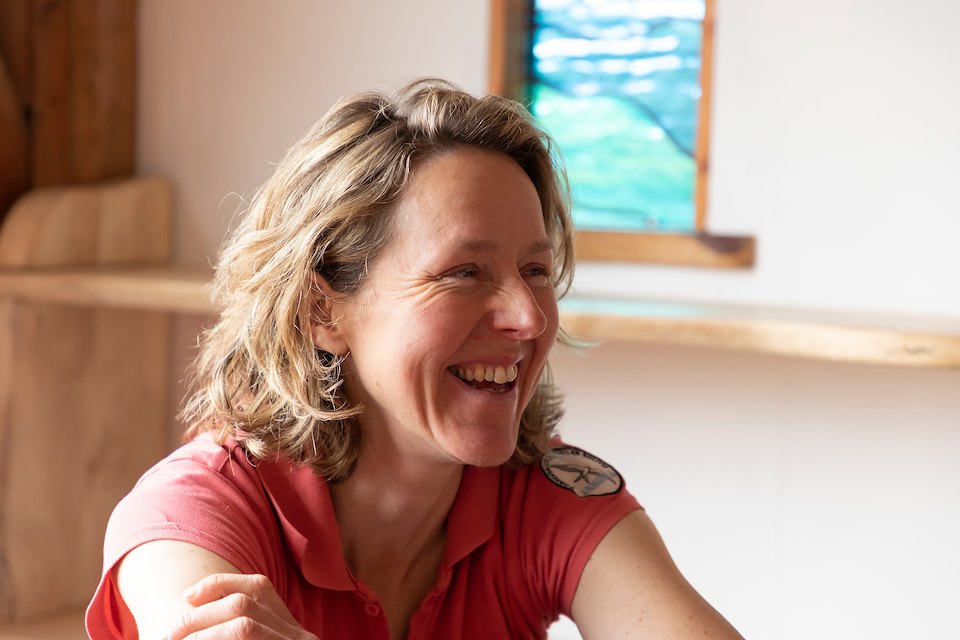 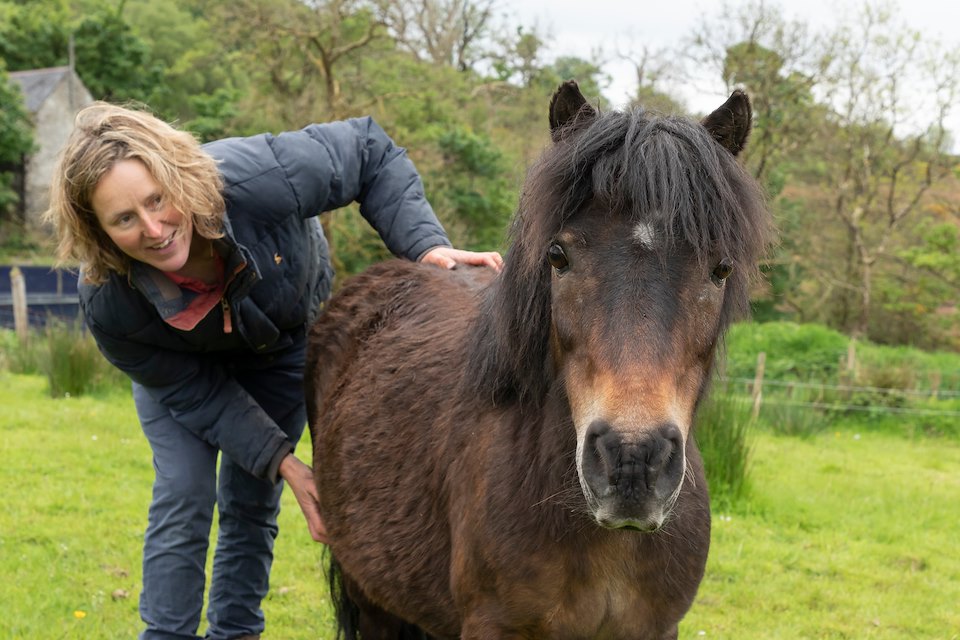 Most people bitten by the rewilding bug have had some sort of revelatory experience in their lives, an epiphany if you like. For the Lowries, this happened in southern Chile, a place with a very similar mix of natural ecosystems to Scotland, but with vast expanses of temperate rainforest still intact.

"I remember thinking:
‘What has happened to Scotland?’"

“Chile ruined Scotland for us,” David laments. “Sailing into bays where the forest hits the sea up and down the coast for endless miles was such a stark contrast with the bare hills of Scotland. It was very graphic. And, once you’ve seen it, you can’t unsee it. I vividly remember thinking: ‘What has happened to Scotland?’”

With an interest in ecological restoration in South America, it was almost inevitable that Katharine and David would come across the pioneering work of Kris and Doug Tompkins, the renowned entrepreneurs and philanthropists who, over three decades, have restored millions of acres of wild lands, turning them into National Parks for the benefit of local communities.

Through several quirks of fate, the Lowries met the Tompkinses and dedicated their long-distance run to raising funds and awareness for Conservacion Patagonica, now Tompkins Conservation­­­. Doug Tompkins tragically died in a canoeing accent in 2015 but Kris carries their philosophy forward. “Their rewilding work was inspirational to us at the time,” says Katharine. “It still is.”

“What we learned from Kris and Doug Tompkins was formative in our thinking for Auchgoyle,” says David. “We have 80 acres rather than 8 million but nevertheless the marriage of ecological restoration, offering a high-quality visitor experience and contributing to the social and economic wellbeing of a local community is at the heart of our plans for this place.”

Katharine adds: “We want to bring people here and immerse them in nature. But this is not just about creating an income. We want people to understand the landscape they’re in, the animals that live here – and those that no longer live here – and importantly, the story of the people who live here. The word ‘tourism’ gets a mixed reaction and I understand why but we’re trying to create a meaningful experience rather than simply a superficial visit – to inspire people in the same way we’ve been inspired during our travels.”

Looking out towards the coastal village of Millhouse, the original Auchgoyle farmhouse shines bright. Now refurbished and accommodating self-catering groups from throughout the UK and beyond, this cosy retreat along with a more contemporary wooden lodge and a couple of soon-to-be-installed shepherd’s huts will form the backbone of Auchgoyle’s hospitality offer.

“This winter, I will start hosting off-road running tours, taking small groups over the hills, along the coast and under the canopies of ancient woodlands. I’ll point out plants and birds and the signs of other animals as we move through this magical landscape,” says Katharine. “We want to feed our guests with organic produce from the farm where we can, and although everything we do is underpinned with wildlife in mind, we want to produce benefits for climate and for the local community too – this philosophy is embedded in our DNA.”

It is clear that Katharine and David have not dived into this new life without a great deal of thought. It is also clear that they’re very conscious of their role in the local community. “Rewilding is so often associated with the absence of people but, as we saw in Patagonia, both can benefit from a landscape rich in nature,” says David. “In the case of Auchgoyle, there are now more people living in and visiting the farm than there were just five years ago – that is satisfying because we don’t want our ecological work to be at the expense of people. Equally, we recognise that this farm previously produced food and we want to make a contribution there too. Hence the hens and the Shetland cattle.”

There’s a temptation to pigeonhole people like the Lowries as romantics looking for a Disneyfied rural idyll – sometimes described as “outsiders with no skin in the game”.  It’s a lazy generalisation and, in this case, inaccurate. David grew up in rural Northumberland and Katharine in the wooded hills of Devon.

“I’m from a farming background,” says Katharine. “We spent everything we had on buying the farm and we’ve invested in a biomass energy system. We’re committed to this community and don’t see ourselves as outsiders, or indeed insiders; we’re just organisms trying to live alongside other organisms.” 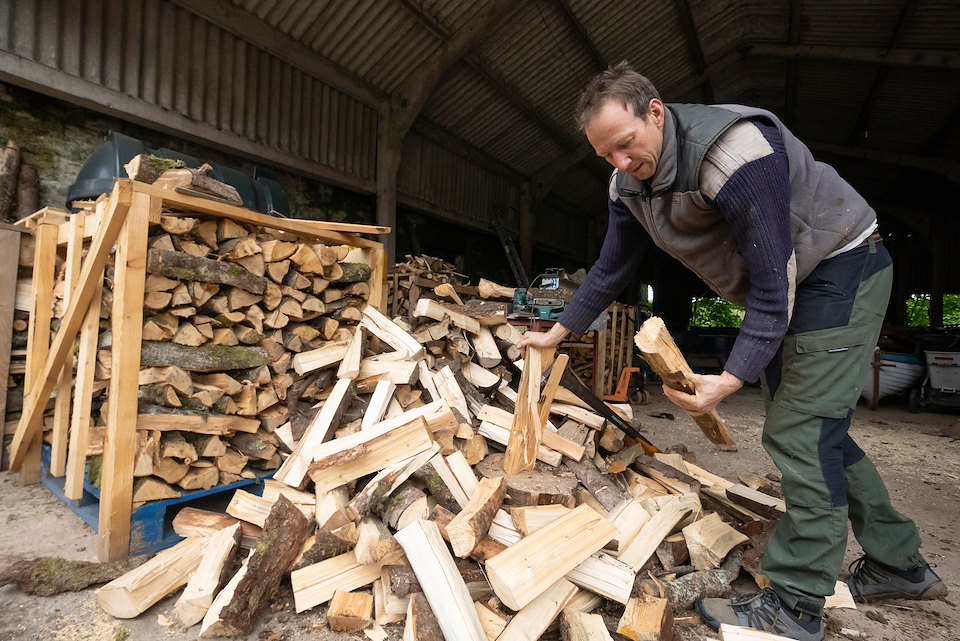 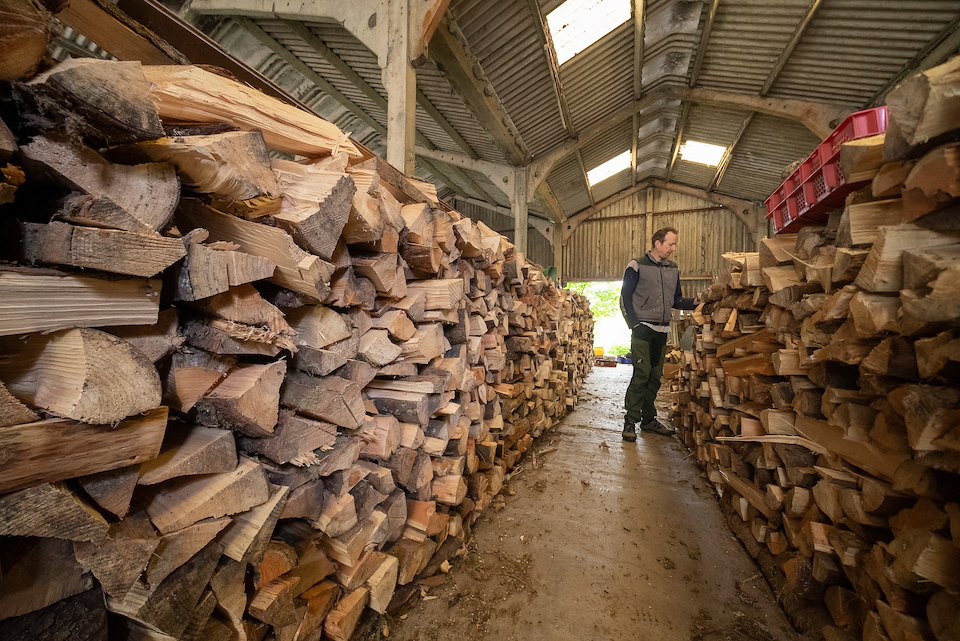 There are tensions – perceived and real – at the interface between rewilding and traditional farming in this part of Scotland, in a debate that involves economics, politics and culture. David Lowrie is unequivocal. “There’s no sugar coating it: farming is sick – not just ecologically but economically. This farm used to be 650 acres – it couldn’t make money then, so it certainly won’t now. If it wasn’t for subsidy, it would have been out of business decades ago. The economics of Auchgoyle were broken before we arrived, and we need to face up to a new approach if rural communities are going to be viable in the future.”

Such a change in approach is neither quick nor easy. The vision for this farm will take time and energy to realise; it’s not a journey for the faint-hearted. The pioneering spirit of this family, however, is palpable and the prize worthwhile.

As we step outside, the bruised sky threatens more rain. A winding burn leads the eye to a lush oasis carpeted with wild garlic and bluebells, a remnant of the rich temperate rainforest that once stretched along Scotland’s western fringes.

Unlike vast swathes of South America, this forest exists in mere fragments, where it’s been spared the axe or the many hungry mouths of sheep and deer. Here, on the remote shores of the Cowal, the forest hits the sea only sporadically. For now.

TELL ME MORE ABOUT AUCHGOYLE FARM

TELL ME MORE ABOUT SCOTLAND'S RAINFOREST

TELL ME MORE ABOUT TOMPKINS CONSERVATION